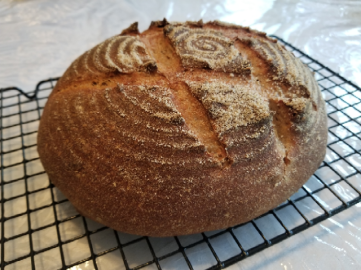 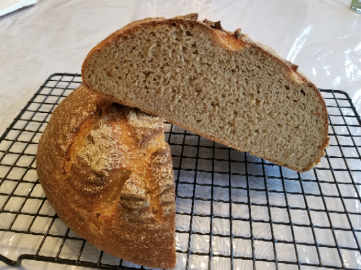 It’s pretty amazing what can be done with these three ingredients.

I’ve been playing around with rye flour recently so it’s time to get back to basics with a whole grain wheat bread. Wheat is not quite as challenging as rye. I used sprouted hard white wheat. I soaked the wheat berries and then dehydrated them, and then milled them. Fresh!

This sprouted wheat gives you the texture of white flour (AP) but with the good taste and nutrition of whole grain (WG). Well, almost the texture of all purpose. More like if you mixed half and half AP and WG.

This full recipe can be found at Golubka Kitchen and if you’re a noob as I am, you’ll appreciate the easy to follow directions. I’ve listed the ingredients above, but here are the quantities: 500g flour, 350g water 10g salt.

The method is a little more complicated than the list of ingredients but go to the site and you’ll learn as you go.

I started a levain at 10pm last evening. Mixing started at 8am today and the procedure continued  until baked at about 4pm today. First slice at 5pm.

It takes all day, but you’re not doing much all day. During the stretch and fold two hour period, you’re doing something for two minutes every 30 minutes. Other parts of the day have down times of two hours between having to tend to your dough.

This loaf has a nice rise and the crumb is very soft and tender. It would make a good sandwich loaf but I love to make the boules. Crust is chewy but gets quite crispy when toasted. The first time I tried this recipe I didn’t pay attention to the last few minutes in the oven and over cooked it. The recipe calls for 20 minutes covered and 20-25 minutes uncovered. I let it go for 20 minutes uncovered without looking and I should know better. Today I uncovered after 20 minutes and checked it 15 minutes later and it was perfect. Nice color and internal temp of 208F. A beautiful loaf.

“Cooking has the power to transform more than plants and animals. Cooking, I found, gives us the opportunity so rare in modern life to work directly in our own support and in the support of the people we feed.

In the calculus of economics, doing so may not always be the most efficient use of an amateur cook’s time. It is beautiful even so. For is there any practice less selfish, any labor less alienated, any time less wasted, than preparing something delicious and nourishing for the people you love?” Michael Pollan, “Cooked”